The Boy Who Swam with Piranhas by David Almond

This story is told in three parts: life for protagonist Stan after his uncle is made redundant when the ship-building industry dies, Stan running away with the circus and Stan becoming the one who swims with the piranhas. There are sub-plots:  the story of Nitasha’s mother and Aunt Annie’s and Uncle Ernie’s return to normality.

This is a humorous novel but it has its darker sides:  Stan having lost his parents before the story begins, the poverty after the ship-building collapse, the hard graft the family have to put into run their fish-canning business, the change in personality that this causes in Uncle Stan, the ridiculousness and eeriness of the DAFT organisation that seeks to shut down the canning business and the poverty of the circus folk. This is however, all mitigated by the love that young Stan finds everywhere he goes.

David Almond writes as an omniscient author here though often gets very close to his characters.  He often intervenes in the text  e.g. “Of course there’s never really a proper end.  The people who’ve lived through this tale will live through many more.  But we have to come to a halt somewhere and this is it” (p243).

The book is 246 pages long. It has blocked text that is double-spaced. It uses a serif but very clear font. There are many quirky illustrations.
.
- January 27, 2020 No comments:

Philippa Pearce’s Tom’s Midnight Garden, a time-slip novel, starts on a low. Tom is being sent away from home to avoid measles. This disrupts his plans for the summer with Peter and pushes him into the unknown. There is a sadness about the house where his aunt and uncle live: it is old, has seen grander days and is encroached upon by modern houses (4). Tom faces further trials when he arrives at his aunt and uncle’s flat: they have no garden, there are nursery bars at his window, his aunt’s rich cooking, combined with lack of exercise, keep him awake and his aunt has supplied him with a load of girls’ books to read.
Then the adventure begins and something sinister happens.  The grandfather clock in the hall seems amusing at first; it strikes the hours wrongly.  One night, when Tom still cannot sleep, it strikes thirteen. The house itself seems to talk to Tom. Then he opens the back door and sees the magnificent garden.  He believes absolutely in the garden; he is disturbed that his aunt and uncle have lied to him that there was nothing to see but a back yard beyond the back door (20). He is not worried, though the reader may be, when he sees a difference in the hall on his return and sees a maid appear (22).  Eventually he realises that sometimes the back door has a Yale lock, at other times just a bolt (37). It all becomes gradually more sinister and when he examines the unusual objects in the hall on his second visit “They looked forbiddingly real” (44). Tom’s apprehension about the strangeness of this is gradually replaced by a fear that the garden and house may disappear (47). He moves like a ghost through the new landscape.  He has no physical substance at first. He moves through shut doors. There are more surprises: one night he sees a tree fall. The next night it is still standing; he does not always go to the same time (57). Hatty admits to having seen him (74).
In their garden Tom encounters everyday problems. There are three boys, a little older than him. He and their step-sister Hatty can only “tag along”. He and Hatty both long to be a member of this little gang. The boys can be cruel. “Let’s all run from Hatty,” says Hubert (65). We also witness Hatty’s aunt being cruel to her (97-98).  Hatty was poor and orphaned and has been taken on by her aunt - an in-law, not a blood relation.  Her uncle is dead.
Tom begins to live for the nights. He even becomes ill; he catches a chill from standing in a puddle of water when he was daydreaming about the midnight garden (103-05).
Tom remains at odds with his aunt and uncle. He continues to believe that they have been lying to them and tries to challenge them (28-29).    Neither is it always paradise in the midnight garden - Tom and Hatty quarrel about who exactly is the ghost (110-11).
There is some risk-taking: Tom walks along a narrow wall (124) in the midnight garden but is in ghost form so presumes he will be all right. Hatty treads on a cracked bough and tumbles to the ground (134-35). Abel, the gardener rescues her. Tom now finds out that Abel has been able to see him all the time. Abel takes Hatty into the house and shuts the door. Tom cannot get back in, nor back to his own time.
Later Tom does get access to more of the house and overhears Hatty’s cousin and her aunt talking about Hatty’s future. They are not too kind. James says “In that case, Mother, she will have to earn her own living, although how she is to do that I don’t know” (145). There is a waning for Tom too. “We have friends and she must not be allowed to hide form them as if she were afraid” (146). Is she to be enticed from the garden?
The whole novel anyway grapples with the nature of time, quite a demanding concept for the target reader. Tom had s a difficult conversation about it with his uncle (174 - 78). The ice-skates form part on an important experiment. Hatty hides them in the secret place in her bedroom. Tom has the same bedroom in the present day flat. He finds them in the present.
We have more of the supernatural too.  When Hatty and Tom climb the tower at Ely cathedral Peter joins them. Peter is dreaming but seems as real to Hatty as Tom does.
Tom keeps in contact with his brother Peter and tells him all about his adventures in the midnight garden. But his letters must be burnt. Here do we have echoes of censorship during World War II?
Tom has to face Hatty’s ageing - first she becomes a young woman and in the present day he meets her again as an old woman. Hatty loses interest in Tom when young Barty comes on the scene. A last attempt at vising the garden goes wrong: there is no midnight garden anymore (216).
The story resolves: Mrs Bartholomew, the landlady and the keeper of the clock, is of course Hatty now as an old lady. However, this leaves Tom and the reader with a puzzle about the nature of time. Pearce offers an explanation through Hatty: Tom so wanted a companion that he influenced her dreams which in turn influenced what Tom experienced in the garden.
Julie Eccleshare provided the afterword in this 1993 edition. She suggests that Pearce has used the time-slip because “she did not want to lose sight for ever of the years that had gone before” (235).
The 1993 edition has a respectable spine. The text is blocked in an adult font. There are 237 pages. Each chapter has a line-drawing that illustrates at the beginning.
Click on the image to find out about editions on Amazon.
- January 27, 2020 No comments:

Town is Sea by Joanne Schwartz and Sydney Smith 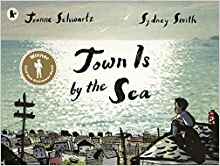 This is a landscape picture book and thus easy for the parent and child to share.  As usual in picture books the story the pictures tell more of the story. The ratio of text to picture is what we would normally expect for this sort of book.

We also have the normal amount of repetition: when (I wake up) it goes like this, my father is digging coal  …

In some ways, however, the text may appeal to a more advanced learner. The protagonist’s observations are quite sophisticated. He thinks about his father’s work and realises that one day it will be his turn.

The author also provides a note at the end of the text explaining what it was like for children who grew up in mining villages.

The Cat in the Hat by Dr Zeuss

Dr Zeuss brings us The Cat in the Hat in 1958 (Zeuss 2016). The story starts off down beat. The children cannot go out to play because it i pouring with rain. Sinisterly they hear a bump and then a giant anthropomorphic cat appears wearing a a hat. He promises to show them some tricks  and points out that their mother will not mind at all. The children are not sure what to do. Their mother is not at home. This would probably not happen in the 21st century. Indeed at this point the 21st century reader may think of stranger danger. The gold fish speaks up and tries to protect the children: “No, no.
Make that cat go away
Tell the Cat in the Hat
You do NOT want to play”(p12)
The cat makes a terrific mess after trying to hold too many things at once. The fish constantly admonishes him and to some extent the children. The cat brings in a mysterious red box. It contain two curious humanoid creatures (p33). The fish becomes even more concerned. The Things are mischievous. They fly kites in the house (p37). Indeed, the Things make a mess (39). Mother is on her way home.  The children become afraid and try to catch the Things (49). Fortunately the cat helps them to get their house tidy just in time for mother coming home.
It was Zeuss’s aim to create fun books for children.
The book is 61 pages long. It is written in rhyme.  The pictures are in just black, blue red and white illustrate and supplement the story. The text uses a quite large adult font.
- January 20, 2020 No comments:

This a one in a series of stories about cats.  Further subtitles are: The Cat with Two Names, Rain Cat, Shop cat, The Cat Who Wasn’t There and Ice Cat.  Author Linda Newberry is a cat lover and keeps cats herself.

There is nothing in the book or on the cover to indicate that this is a book for early readers. The child can have the delight of picking the book to read. It has a respectable spine.  Yet the props are there: There are short chapters, the text is printed in a large font (though it has a small serif and difficult ‘a’s and ‘g’s), the lines are double-spaced, it is formatted ragged right and there are line-drawings which mainly illustrate but occasionally tell more of the story.

There is plenty of story, a ghost story at that.  Protagonist Simon has moved into a new house – which is actually quite an old house and sees a strange old lady in the garden next-door.  No one else can see her. She seems to talk to the plants but she is actually talking to the cats who are buried beneath them. She is troubled about Smoke, who is also confused and distressed. Simon helps them both.
- January 16, 2020 No comments:

The Tractor Factor by Amanda Brandon and Maarten Lenoir