Noddy and His Car by Enid Blyton 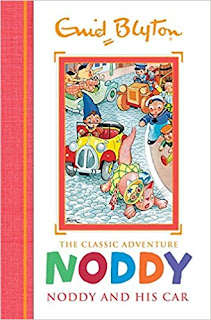 Enid Blyton remains a puzzle. Her books for all age groups continue to sell and yet she is questioned  by many educationalists.  In the 1950s she was criticised for her poor writing and more recently her lack of political correctness has become an issue.  So, she is popular but her works can hardly be described as classics.

The Noddy books have indeed been sanitised. The wicked gollywogs have been replaced by trolls. We still have the problem of Big-Ears who has acquired his name because of a faulty body part yet he remains a good mentor to Noddy.

Alas, the females are fluffy and shown as dependent on males. The males are authoritative and over-bearing.  Perhaps, though, this is just reminiscent of the time in which Blyton worked and lived.
Yet the story still appeals. It is a satisfying well-structure story with an upbeat ending and the illustrations tell more of the story, illustrate and amuse.

It's a bit of a puzzle. It is word-rich and employs a serif font with difficult 'a's and 'g's, implying that the adult might read to the child. However, the use of ragged right and the nature of the pictures suggest that this book might also be suitable for emergent readers.
- April 24, 2020 No comments:

A Most Amazing Zoo

The Queen visits the Zedgate Zoo and meets all the amazing animals there.  Each animal greets the monarch and tells her and the reader some interesting facts.

This is as highly illustrated as a picture book for a younger child would be.  The text is quite dense and is on the left hand page each time. The pictures illustrate and enhance the story. This would therefore also be appropriate for an adult to read to a child.

The pictures also include faces  with conventional comic stylised expressions, so that child is leaning  a secondary type of reading.

It is 42 pages long. 50% of Royalties are being donated to Search Dogs Buckinghamshire .

The Children of Willesden Lane by Mona Golabek and Lee Cohen

There are so many different ways in which people survived the Holocaust.   This one at first resembles my own book written for a similar audience: a young girl leaves on the Kindertransport, she and her companions have to take care of a baby, someone is seasick , someone is determined to keep up with their music and the mentor is called Mrs Cohen.  It too is based on a true story.
Then it is different. The protagonist, Lisa Jura, opts to remain amongst other Jews though she is treated well by her English employers.

Lisa does well with her music. She is reconciled with both of her sisters but her parents are never found.

Many stories about the Holocaust span several years so it can be difficult to identify the target reader. This one is about right; it will be readable to teens in the lower half of secondary school and this is precisely when the Holocaust comes on to the curriculum. The text would be very readable by slightly younger children but perhaps the inclusion of a love interest and the Holocaust may prevent this.

Even though the text covers a long period of time it remains engaging with plenty of dialogue and action. We do get to know Lisa quite well.

This is published by a long established publisher, W Franklin Watts, so its ragged right formatting and rather large indents at the beginning of each paragraph may surprise us. It is double-spaced but uses an adult font.
- April 17, 2020 No comments:

The Death Cure by James Dashner

This is the third story in the Maze Runner series.  The ending is very open and there is a fourth book to follow.

Thomas is identified here as a type of final solution – WICKED wants his brain. They need to examine it in order to find a cure and antidote to Flare.  Flare is a pandemic.  The disease makes its sufferers crazy and also turns them into flesh-eating animals. Thomas and some of his friends who have been kept in the Maze are naturally immune.  Not all of them, however, and some of his friends are part of a “control “group.  Once they’re out in the real world one of his friends succumbs to Flare.

The disease is called “Flare” because a solar flare caused it to escape forma laboratory.  It was a man-made disease.

Note, I read this at the time of the lockdown because of coronavirus. Flare causes completely different symptoms but it spreads in a similar way.

Like in all of the Maze Runner novels the pace is fast.  This is partly achieved by the use of very short chapters – three to four pages long.  There are multiple twists and turns as well and the stakes are high throughout.  There is quite a bit of violence.  There are also several deaths and Thomas feels the loss of friends and loved ones, and guilt when he is forced to kill.

It is a thick book, 328 pages long. The font is small and the text is blocked. Each chapter has a decorative representation of a maze in its header.

Here are some familiar fairy stories though the titles may fool you:  Rapunzel becomes The Tower and the Bird, Rumpelstiltskin becomes Straw into Gold, and Cinderella is Roses Around the Palace. We are also offered some rather interesting details about some well-known stories. The mayor of the town with the rats tells us how the children who replaced the lost ones were much more amenable than the ones who were piped away. A young girl has a sliver of the looking-glass that once belonged to a wicked queen.  Whilst the girl has chickenpox her grandmother tells her Snow White’s story.  It is true she assures her granddaughter. How does she know? Because she is Snow White. Hansel and Gretel tell the story of what they did in their holidays.

There is perhaps an assumption that the reader will be familiar with the original stories. Certainly they are amusing and not just for the young reader.  Adults can enjoy them too.

This is quite a hefty volume with a nice fat spine. The text is blocked and the font is just a little bit larger than we would normally find in a book written for adults.

There are some black and white illustrations that are partly decorative and partly informative.

At the end of the book we have information about the author and the illustrator. Hilary McKay also suggest further reading and points us towards the work of the Grimms, Charles Perrault and of other significant writers.

click on image to view on Amazon  2021 Nikolas lives with his father. They are poor.   His father works hard and earns little, so he an...