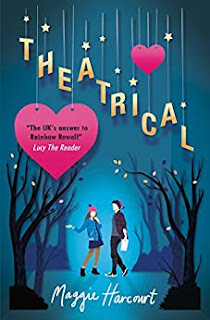 This is a long book –some 439 pages in fact – excluding end matter. It use a serif font with difficult ‘a’s and ‘g’s .  It is also quite a small font.  So, this presents some reading challenges.

The novel is packed with details of the theatre. This would be a very good read for any young person who is thinking of a career in the theatre. Maggie Harcourt, a lover of theatre herself, includes  all of the technical details into the story, without detracting from it.

Hope Parker is the daughter of well-known theatre costume designer, Miriam Parker, but secretly applies for an internship in stage management with the Earl Theatre.  It is important that she manages her life in the theatre world without relying on her mother’s influence.  To her great surprise she is successful at her interview.

There is a gentle romance as well.

Hope’s relationship with her parents and her two perfect sisters is strained but all of the characters remain rounded.

There is plenty of tension and pace as Hope overcomes problem after problem.

A Wizard of Earthsea by Ursula Le Guin

This is certainly a Bildungsroman, packed with symbolism.

Duny aka Sparrowhawk aka Ged has to find himself. He has to come to terms with his magical powers and how best to hone and use them, he has to learn his true name (Ged) and he has to confront the shadow that pursues him and find out that this is his alter ego.  He has to do this without his mentor, Oigon and without his familiar, the little otak.  His friend Vetch accompanies him on the final mission in the book but Vetch is powerless to help him at the crucial moment.  He can only be a moral support.

We can recognise many of the tropes also employed by later writers; like Harry Potter he goes to a school for wizards and he has an animal that stays with him rather like the daemons in Philip Pullman’s Dark Materials trilogy. And as in many stories he finds that the hardest lesson is the one he learns at home.  Yes, he travels far and wide in pursuit of the shadow but the finds that the shadow is himself.

Unlike 21st century novels for the young adult this does not include a love interest.   However there is the hint of a seductive goddess figure in Serren.  Vetch’s younger sister Yarrow shows him much affection and we are left wondering whether a close relationship may follow.

It is a slightly short text for this age group – just 200 pages long. Since the turn of the century texts for young adults and teens, and even fluent readers have become longer.  Each chapter  is headed with a decorative icon. Ursula Le Guin uses a sophisticated Tolkiensque language.
- March 31, 2020 No comments:

My Story Suffragette by Carol Drinkwater

2011,
Dollie tells her own story through her diary.  She is a young girl who used to live in the slums.  She is given a chance in life and adopted by a rich family who make their money from the docks.  She becomes involved with Women’s Suffrage and Political Union.
The text makes the difference between suffragettes and suffragists quite clear. We read some gruesome details of how women were imprisoned and what happened when they went on hunger strike.
Dollie herself is imprisoned and is force-fed.  She is also present at the Derby at the Epsom race course on the 4 June 1913 where Emily Wilding Davison throws herself down in front of the king’s horse. Emily died of her injuries on 9 June 2013.
At the end of the book is a useful timeline and there are also some intriguing photos. The author provides some historical notes.
This is one of a series of “My Story” books where history is brought to us through the voices of young people.
- March 21, 2020 No comments:

Orphaned Christina moves from one relation to another.  When she becomes twenty-one she will inherit a fortune but until then she must be her own person.  She is sent to run-down Flambards where her cousin Mark and her uncle Russell are obsessed with horses and hunting and where her other cousin William despises hunting and loves aeroplanes

Christina faces a disturbing complexity of life: the unfairness shown to servants and members of the working class. This comes to a head when the groom Dick is dismissed because he has helped Christina save her horse that had gone lame and should have been served to the dogs. This escalates when Dick’s sister Violet is made pregnant by Mark. Dick and Violet’s mother ends up in the work house and Violet moves to London with the baby.  Dick reappears briefly to fight with Mark.
Christina loves riding and hunting though remains in awe of it and is also a little afraid.

She is torn between the three young men in her life. She shares some tender moments with Dick yet that can never be as he is entirely the wrong class for her. She supposes she will have to marry Mark and is resigned to this if not enthusiastic.  In any case they share a love of horse-riding and there are despite his boorishness one or two affectionate moments between them.  It is clear by the end of the novel, however, that she is in love with William.

There are many ingredients of the teen and young adult novel here. The pace and tension towards the end had me turning the pages rapidly even though I know the story already.
K M Peyton presents a world that will not be very familiar to the twenty-first century reader. The ups and downs in Cristina’s emotional life will be.
- March 21, 2020 No comments:

Only Remembered edited by Michael Morpurgo


This is an edited collection of commentary on World War I, or the Great War. It consists of short articles by influential people such as politicians, writers, actors and producers – and most quote some fiction though this is rarely children’s fiction.

It is a little surprising , then, to find it in the children’s  section of the local library and one can’t help wondering whether it is simply the name Michael Morpurgo that has caused that to happen.
On the other hand, this is still very readable by the upper primary and lower secondary child. Each section is short and thought-provoking.  The book would also be useful in the classroom where the Great War is being discussed.

The articles are grouped into three sections:  At War, At Home and After.

Ian Beck’s illustrations enliven the text.
Between them, the texts offer a balanced view.
- March 06, 2020 No comments:

Don’t Stop Thinking About the Future

Stevie and Hafiz both have problems: Hafiz is an asylum seeker who has had to leave his family behind. Stevie’s mum suffers from depression and cannot be a proper mother to Stevie.  They become friends and support each other.

There are signs of hope all along the way. As well as finding refuge in each other Stevie’s music and Hafiz’s football give them a purpose.  Hafiz eventually learns that his parents are on the way from Syria and Stevie’s mum’s mood lightens a little towards the end. We don’t know of course whether Hafiz’s parent s will make it and whether Stevie’s mum’s improvement is permanent.

Hafiz and Stevie seem authentic. They each tell their story in fit person narrative in alternating chapters. The chapters are pleasingly short.

The novel tackles some interesting themes and could lead to useful classroom discussions.
The book has 342 pages.  The text is blocked and in an adult font.
- March 06, 2020 No comments:

Tulip is obsessed with make-up. She is a competent well-followed vlogger. As in many texts for this age group she has dysfunctional parents.  She adores her younger brother and sister yet they also irritate her at times.  She has her supportive girlfriends and there is the usual love-interest.

This text, however, rises above the normal real-life story for this reader. Tulip is challenged to appear on a TV survival show. She seems to be the least likely to succeed in the whole group.   There are other challenges in the rest of her life and she meets them all head on.

Anna Mainwaring has created rounded believable characters about whom we care.

Tulip finds solutions to all the problems she faces.  She dispels the myth that her generation are snowflakes.

OIlivia Levez describes it as “A Pride and Prejudice of Our Times’. Maybe.  There is so much more to it than that, though.

Grab your copy by clicking on the image 2016   These are very gentle, heart-warming romances.   They also give some insight into the A...