Kick the Moon by Muhammad Khan

Kick the Moon by Muhammad Khan 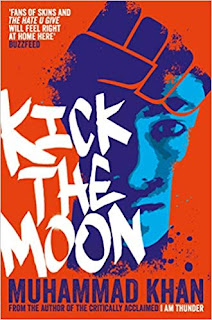 Protagonist Illyas faces many challenges. He has GCSEs at school. He is small for his age. His father constantly tells him to “man up”. There is pressure too for him to join the family business.  He is compelled to be a member of the DedManz gang. He is helped at first by unlikely friend Kelly Matthews but she then also gets drawn into the world of DedManz and becomes the girlfriend of bad boy Imran.  However, Illyas’s greatest interest is in creating a comic book with an inspiring super-hero character.
The novel ends on an optimistic note though the reader is left to decide what happens next.
Muhammad Khan presents us with some believable rounded characters. Some of the dialogue is impressive and really captures the voices of the struggling teenagers. However, at times the words and thoughts seem far too sophisticated for the young people here. Illyas quakes inside but speaks out aggressively and at times philosophically.
Illyas’s relationship with Kara and Kelly is not sexual but Kelly and his sister are sexually exploited.
We watch Illyas grow and acquire a little more confidence. This growth, the references to sexuality and the somewhat open end make this suitable for young adults.  Illyas is however quite naïve so the text would also be suitable for younger teens.
- June 23, 2020