The Enchanted Wood by Enid Blyton 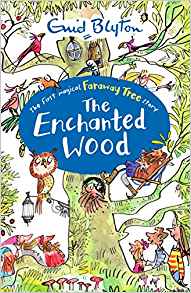 This is the first story in Enid Blyton’s Faraway Tree series. We are introduced to the main characters and the world of the Faraway Tree.  Each chapter contains a separate adventure.
Joe, Beth and Frannie (formerly Fanny) climb the magical tree several times and each time are taken to a different world. Some of the worlds are less pleasant. The lands move to and from the tree and the children must return before the land moves on. Getting stuck in a land is unpleasant and frightening. The children experience genuine xenophobia which after all is a real fear. Arguably this presents a balanced view of our interaction with other cultures. The tree is full of quirky characters - including Dame Slap, a corporal punishment enthusiast. In recent versions of the story she has been replaced by Dame Snap who has been softened somewhat. Joe throughout takes charge. He is always bossing the girls around. However, he is the oldest child so perhaps he would be in charge anyway. Even in newer versions some old-fashioned language exists. “I say!” “Do let’s.” This language is also decidedly middle class. Yet father is poor and “could not afford to do anything but walk there” (2). The cottage was five miles from the station. Beth makes the toffee for Moon-face. Females are domesticated(43).
Neither Blyton  nor her characters deal well with those who are different.  The clattering of the Saucepan Man’s saucepans make him somewhat deaf and he becomes a figure of fun (94-121).
Comfort is as usual provided in the form of food. “They were so tired they could do nothing but tumble into their roughly-made beds” (3). Their big adventure starts when their mother sends them off with a picnic as a reward for all the help they have given 8). A later picnic is also described: “Mother cut sandwiches and put them in a bag with three cakes each. She sent Joe to pick some plums form the garden and told Beth to take two bottles of lemonade” (17). When they eventually find Joe, after his adventure with the Snowman, safe and sound in the cottage with Goldilocks and the three bears Goldilocks says “Come into the kitchen and we’ll all have some hot porridge and milk” (75). The actual feast she offers in the end is more lavish. Once the children and the inhabitants of the Faraway Tree get rid of the goblins Moon-Face declares: “We’ve got them all safe. My word I am hungry. What about having a  good meal?” (173).
Perhaps more disturbingly the children are sent off on their own - a common trait in Blyton’s books - and immediately engage with strangers - in the form of elves and a goblin (12). Fantasy offers some distance and perhaps ironically when this book was first written in 1939, when World War II was imminent, “stranger danger” was not so much of an issue. Surprisingly their mother does not object to them going for tea with the strange Saucepan Man (102).
The story is loaded with fantasy. The children are warned early on that the forest is enchanted and there is even a hint that it might be dangerous (6). They meet the elves and the goblin the first time they go there. The second time they meet a talking rabbit (20). Fantasy also provides an escape but it may not always be welcome when the reality of being in a strange place kicks in. They cross the first threshold and then Beth refuses the call. “’What I’m worried about is getting home,’ said Beth. ‘Mother will be anxious if we’re not back before long. What shall we do Joe?’” (32) Tension mounts as they establish that the Faraway Tree is not quite touching the new land, Roundabout Land.
The children soon learn about basic economics bordering on bribery: Moon-face will only let them use his special slide to get down the tree if they pay him in toffee (38-39). They also have to face the realities of war. The girls are brought into a conflict when they try to rescue Joe from the Snowman. “After all, if people are fighting you, you can’t do much but defend yourself” (67). Perhaps another reference to the conflict that is happening in Europe at the time that the story was first written comes as father bear comments: ”The white bears are cousins of ours, and have always been friendly - now they seem to be enemies” (76). They rob the old lady in Rocking Land admittedly accidentally but show little remorse:  Moon-Face says “ we can’t possibly give them back to that cross old woman in Rocking Land so we may as well put them to good use here” (115). They become greedy when they visit the land of Take-What-You-Want (114-137).
At times they confront danger and take risks. Their second adventure engages them with a land covered in snow and the dangerous Snowman (50-57). Later, the inhabitants of the Faraway tree are surrounded by goblins. The children have to get into the tree by going up the slippery-slip (161-65). There is some mitigation here. however. Moon-Face has not escaped via the slippery-slip because he does not want to leave his friends in danger.
This first Faraway Tree story ends with a glorious birthday party for Beth. For a short while things go wrong and they are whisked away into a forbidding land. They get back to the Land of Birthdays and eventually to the Faraway Tree and home. The adventures have ended for the time being but the reader is left with hope: “Perhaps they will have more adventures one day” (210).
- July 16, 2020