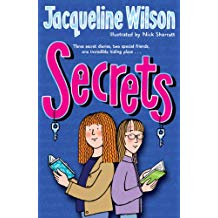 2014
In Secrets we have the stories of Treasure and India via their diary entries.
Secrets opens violently with Terry, Treasure’s step-father, taking off his belt to her and thrashing her. Just before he starts hitting her, he has torn pages from her diary; she had invented all sorts of elaborate torture methods for him. Terry’s violence has been ongoing for some time and not just towards Treasure.
Even before Terry came on to the scene life with just Mum had not been good. Treasure’s mother had no time for her when she was little. Treasure generally has low self-esteem.
India’s father is different form Terry. He isn’t violent but is constantly under stress because of his work. He has little time for India. He also has affairs with the string of au pairs that come to look after India. He is plagued by constant money worries. Eventually he embezzles the company he works for. Her mum isn’t all that much of a mother, either. She is obsessed with dieting and puts pressure on India to lose weight. Perhaps the ultimate problem in the relationship between India and her children’s clothes designer mother is that she hates the clothes her mother designs. They are too small, bright and sparkly. Similarly, a friend of her mother’s has written a book about diets for intelligent children.  Her own intelligent son remains fat and refuses to go on the diet described in the book. It is likely also that India’s mum is anorexic.
India is desperately lonely and has difficulty making friends. She envies Anne Frank who had a lot of friends before she went into hiding. India hides within the house for two hours and no one notices.
Wilson takes a risk in being explicit about the Holocaust. In an outburst when other class members are not taking a reading of “Anne Frank’s Diary” seriously India gives us a graphic description of what the concentration camps were like.
The two girls live on separate estates. Treasure is on the very bleak and tough Latimer estate. India lives on the luxury complex of Parkfield Manor. The two groups of residents gaze at each other xenophobically. We have the beginnings of a dystopia. The girls’ first meeting is tentative.
There is some mitigation in that Treasure’s grandmother cares for her and even step-sister Bethany is kind when Treasure has to leave; she gives her a designer T-shirt that she had previously guarded jealously. Treasure finds a good family situation with her grandmother, child-aunt Patsy and her cousin Loretta’s baby, Britney. Life is comfortable with Nan, but she cannot quite forget the horrors of her life with Terry. However, her mother is adamant she should return; she needs help with the younger children. Eventually her mother and stepfather threaten them with social services; Nan’s partner Pete will be coming out of prison soon. However, Treasure eventually gets her wish and is allowed to live with her grandmother. But she is torn; she still loves her mother and will miss her.
When India and Treasure first meet, they are initially wary of each other but they have the courage to talk it out. They speak and listen to each other. Wilson thus gives her readers some hope that conflict can be resolved. In the end, India manages to stand up to her mother.
There is an ironic twist in this story that makes it even darker. “Mumbly Michael”, Nan’s neighbour with special needs is accused of murdering Treasure.
As ever, Wilson skillfully gets rid of the grown-ups.