Stories of the First World War by Jim Eldridge 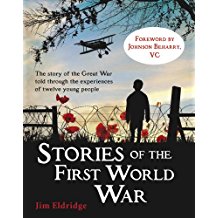 This is neither an easy nor comfortable read.  It includes twelve short stories about the Great War. Each one is told from the point of view of a young person.  Most of them are to do with combat and many feature death. A couple of civilian stories are also quite grim. One involves a bombing, anxious parents and the rescue of a friend and a dog. The other is about a much-changed young man who at first cannot face going home; he was one of only seven of the Accrington Pals who survived. He is different now also because he has been a prisoner of war.
Jim Eldrige writes a few of the stories from a German point of view.  The British and the German experiences are very similar. He even tackles the conscientious objector – the “conchie” and invites the young reader not to see this just in black and white.

The stories are in chronological order and there are sections between them that give historical contexts.

This would be an extremely useful book for teachers or parents wanting to study the Great War with   children. The child probably needs some adult guidance.