The Song of Somewhere Else by A/F. Harrold and Levi Pinfold 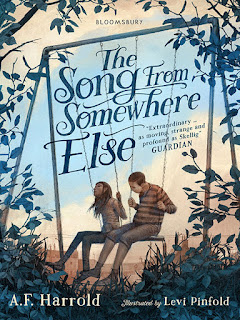 This is a slightly puzzling book. It seems to be a book for the fluent reader at the end of junior school. Yet it contains elements for other age groups.

It certainly has a nice fat spine and uses blocked text which suggests the fluent reader.  It also uses a serif font and includes difficult a and g which again is normal for this reader.

It makes a concession to the new reader by containing a double-spaced text.

As in picture books for the pre-school child, the pictures add to the story, although they are in black and white and are more sophisticated than they would be for the younger child. Pictures are clearly important in this book; it was shortlisted for the Kate Greenaway prize in 2018. The text also included quite a few decorative elements. Some of the pictures, however, are very dark ,  e.g. the double spreads on pages 116-17 and 162-3, and this brings it back up into the older age group.
There are elements also that suggest a teen reader. The protagonist reasons logically – is she in   Piaget’s formal operations stage? She behaves like a teenager. She is reluctant to tell her father about her day at school. Bullying is a teen theme.

The children are left home alone so there is plenty of opportunity for them to have their adventure on their own.

It includes high fantasy elements – including a troll mother and a talking cat. Shades of Alice?

Bordering on horror? We are also treated to the mystery woman – the agent of Extra-Existent affairs.