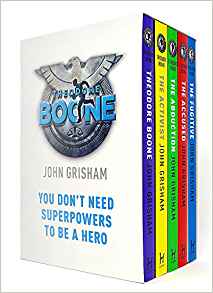 I actually found this book in the teen section at the local library.  Younger teens may very well enjoy it though it lacks some of the peer pressure and sexual angst often seen in books for this age group.

However, protagonist Theodore Boone does take charge of his world and in this case helps convict a man of murder. In a sub-plot we see him act as a lawyer in an Animal Court.

There may be no latent sexuality or love interest but Theo’s best friend is April.

Theo is just thirteen years old and we and our young readers may be amused that he and his classmates take great delight in “passing gas” on the coach when they go on a school trip.

John Grisham employs a very readable simple prose here. His characters are very well-drawn – believable and rounded.  Theo waivers between demanding justice and being scared of the consequences of his actions. Uncle Ike is a rather eccentric but good-hearted character. The Boone parents argue about the law in a friendly way.  With Theo, they are firm but fair. April is more adventurous in her choice if ice-cream than Theo; she goes for a new flavour every time whereas he always has the chocolate covered in Oreos.

Grisham raises the tricky topic of illegal immigrants or “undocumented workers”.  The chief witness in the trial, Bobby Escobar, is an illegal immigrant. The defence argues that he is taking an American’s job and that he s is only giving this evidence so that the police will protect him. In the discussion around this Theo thinks that many Americans would not want to do the work that Bobby does.

This particular edition is easy to read.  It is a double-spaced hardback, part of  five book box set. At the end of the main text there are some useful further activities.