The Fault in Our Stars by John Green 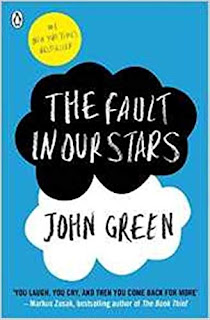 This tackles many themes that interest the target reader.  John Green presents us with death, cancer, depression, grief, family relationships, peer relationships and some mild peer pressure. Green also explores the notion of fiction, both in his notes within the book and in the character of Peter Van Houten, a drunk and an egoist who has at one time been a writer.

Importantly, Green encourages us to look at those who suffer from cancer as whole people, not just as victims of a disease.  These need not necessarily be nice people.

Nice or not, the characters are richly drawn. As we have come to expect from Green, the characters are rounded and believable. Hazel narrates the story and has been given a convincing and consistent voice.
The growth in protagonist Hazel is mild and somewhat negative though we also have plenty of positives:  love, romance, gentle sex and for some, survival.

The book is some 316 pages long so has a respectable spine. The text s blocked and a serif font, with difficult  ‘a’s and ‘g’s is used.  A bordering on adult readership is further confirmed by quit demanding language and much abstract, philosophical thought.  This edition was published in 2017. The novel was first published in 2012.
- October 09, 2020