A Note of Madness by Tabitha Suzuma 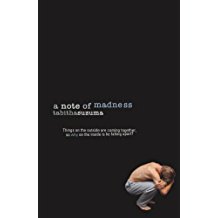 2006
Music student Flynn is bi-polar. It takes a while for him to gain a diagnosis. Flynn seems at first to be clinically depressed. Only later is it clear that this depression is because of his bipolar condition.
Flynn and his two friends, Harry and Jennah, attend the Royal College of Music. Life is very competitive. Flynn’s illness creeps up on him. It starts as exhaustion. He is tired all the time despite sleeping for twelve to thirteen hours a night. An early manic episode manifests as he transposes a piano sonata by an obscure Russian into a piece for piano, cello and voice. This could be innocent enough but it is his excitement that is disturbing. Shortly after this, he goes for a run and then stops up all night composing. This is quickly replaced with “impostor syndrome” when he finds he can’t play the Rach Three - a piece he had almost mastered previously.
After Flynn takes a lot of aspirin and drinks half a bottle of whisky, Harry realises that there is something wrong and sends for Flynn’s brother, Rami, a doctor
Typically adolescent, Flynn thinks one thing and says another. He sees Rami’s suggestion that he take anti-depressants as a ray of hope but is adamant he will not take them.
He does take them and they work but Flynn feels there is no need to carry on seeing the psychiatrist. He is functioning better but the “impostor syndrome” continues.
Despite the medication, Flynn is tormented. As he drives himself and Rami to the family home for their father’s birthday. He has suicidal thoughts. He also suffers from paranoia. He believes that his father and Rami have been talking about him. He is convinced that his parents hate his old piano.
Just before he goes to the first rehearsal for an important concert he pours the remaining anti-depressants down the toilet. He has decided they are ineffective.
The pressure about the concert becomes enormous. When Harry invites his girlfriend Kate and Jennah over for a curry Flynn has what looks like a psychotic episode: he thinks the ceiling is going to fall on them. He gets angry with his friends. He admits he is very worried about the third movement. As they drive over to Rami’s house he is convinced that the car is buckling and will crash. At Rami’s house he feels the wall closing in.
The novel raises the topic of public perception of mental health issues. Even Flynn labels himself as “mad”.
He sufferers a common side effect from taking lithium: he feels very tired. His doctor assures him it will get better. He stops taking the lithium.
He agrees to his professor’s suggestion that he tries the Rach Three again. He promptly has another manic episode but doesn’t recognise it. It carries him though his exams and then he plunges. He considers suicide
Flynn is at times petulant. It is sometimes difficult to distinguish between his mental illness, normal adolescent behaviour and even his artistic temperament. There is as strong possibility that readers may think they share his symptoms.
The story of his relationship with Jennah lifts the text somewhat. He has been in love with her for seven years but only admits it right at the end of the story. The epilogue shows us him with Jennah, on his meds, and making his way to the International Piano Competition. The ending is upbeat and hopeful though the prologue did suggest something else.