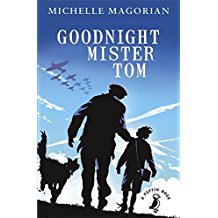 Set in World War II, this story brings us the themes of war, death, abuse, friendship and growth. Young William Beech poses reclusive set-in-his ways Tom Oakley a challenge when he arrives as an evacuee in Little Weirworld. There are some grim scenes and both Will and Tom have a hard time of it but the ending is upbeat.
This is perhaps the best known of Magorian's books, many of which are set in this era. This one could be described as a modern classic.
This is clearly suitable for the fluent ready in the latter stages of Key Stage 2 and the last two classes of junior school, ages 9-11. It would also appeal to slightly older readers and adults.
Magorian's characters are richly drawn. She uses a close third person point of view and we get to know each one of them really well. She does flit from head to head a little which may disturb the modern reader somewhat but nevertheless we remain gripped until the end.
I was very happy to reread this book.