Being by Kevin Brooks 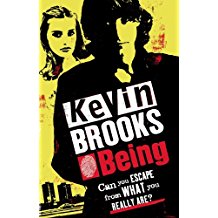 Fostered sixteen-year old Robert Smith goes for a routine endoscopy and things go badly wrong.
The novel is a car chase from the very beginning. Short sentences and frequent line-breaks maintain a fast pace. Kevin Brooks keeps us guessing all of the time. The pace slows later as the story turns to romance and sex.

Robert tells his own story in a first person immediate narrative that as so often in books written for young adults makes the reader feel as though the narrator is their best friend and is telling their story in order to work what has happened.

Is it a thriller? Is it a science fiction?  There is violence and Robert takes risks. There are also elements of the thriller in this novel.

There is something odd about Robert and the reader is left to find her own explanation.

The fast pace and the thriller elements in the first part of the story make it seem suitable for teens.

The content in the latter half of the book brings it more firmly into the YA area.
- September 24, 2020